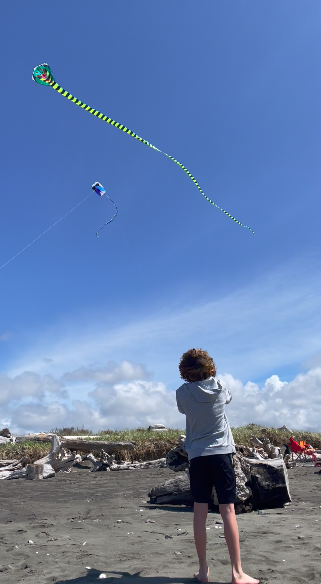 My most common flying dreams usually consist of my body being prone with my feet lifted up from the ground one to two feet of the ground with me hovering over walkways or roadways. The best way I can describe how this might look to others in my dream would be me steering an invisible Segway. However, all the people in the dream who are walking alongside me (their feet touching the ground) don not seem to notice that my feet are not touching the ground, nor are my legs in motion. I am somehow floating to my destination.

In other flying dreams I find myself sitting in a little car, much like the human-powered car used in The Flintstones cartoon.

I push myself off the ground using my legs for lift-off and the car hovers for a block or two down the road until gravity overtakes me and I have to give myself another shove. These dreams are the most frustrating with me barely getting off the ground and having very limited momentum. Motorized cars are usually whizzing by me while I am plugging away. Yet, I am still amazed to be making headway under my own power.

A third type of recurring flying dreams I have experienced over the years is what I would call a truly flying dream. In these dreams my body is stretched out like a superhero without a cape. I will be flying several feet above the ground. But again, like the other two types of flying dreams, my flight is limited in accordance with street byways. I will fly only over the roadways, not over grasses or waterways. The only time I would fly over water would be if there were a bridge arching over the water beneath me. In these flying dreams I even adhere to road rules, stopping at red lights, and slowing down at yield signs. Although, sometimes I will perch myself on the rooftops of houses along the roadways and take a break from flying and watch the traffic go past me.

In all three types of my recurring flying dreams I have described I am confined somewhat, limited in where can travel by adhering to sidewalks or roadways. I have always "dreamed" of having a flying dream without these limitations.

This time my flying dream was different. My dream began with me as a young teen sitting in the backseat of my family's car. I was traveling with my parents, we were headed for our camping vacation. When we entered the park I asked if I could get out and fly myself to the campsite on my own, permission was granted. For the first few miles I flew directly over my parent's station wagon but somewhere along the way I took a detour and lost sight of them. However, I was not concerned. There was plenty of daylight left. I could go off on a flying adventure on my own and still have time to meet up with them at the campsite later in the day.

Oh JOY! I was flying over grassy meadows, woodlands, creeks, and more. I could see fisherman baiting and casting their lines. Campers were setting up their tents at various locations in the park. I had a birds-eye view of woodland creatures (beavers, squirrels, foxes, and others). The landscape beneath me was so beautiful. I was soaring through valleys and over streams with heightened excitement.

At some point I came to the realization that I was not flying at all but rather laying in my bed having a flying dream... Whoa! I was lucid! Knowing this is when my dreams usually halt mid-stream. But not this time. It no longer mattered that I had lost my way and needed to locate the family campsite because I knew eventually I would awaken in my bed. I was a grownup, not the teenager that my dream dictated by parental rules or any rules really. I was lucid after all. Yet, I was fighting to stay lucid, I knew I must be on the edge of waking up fully. Maintaining lucidity in dreams can be tricky.

I was determined not to end the most fantastic flying dream I had ever experienced too soon. I took a deep breath and soared higher into the blue skies and this time my flight took me back in time. I was flying atop a small Indian village near Red Lake.

Knowing I was dreaming while lucid I became concerned that if my eye lids fluttered even slightly that I would likely be returned to the reality of my bedroom. I pushed that thought aside and I continued flying in beautiful lucidity for what seemed like hours. I could go into great detail here, but won't, marathon storytelling can be a bit of a drag for the listener/reader.

Eventually, I was beginning to feel weary of flying and hoped it would be okay to land on the ground for a bit and take a walking tour of my dream surroundings. But, I thought for sure if my feet touched the ground in my dream my physical body would automatically awaken from its slumber. However, I did not get a chance to to test out this theory as at that moment I heard my husband stir in the bed beside me. His movements woke me up!

Later in the day I Googled Red Lake and discovered that there is a Red Lake Indian Reservation in Minnesota. Never been there. I live in Iowa, so apparently lucid flight miles were significant... no wonder I was so tired when ! awoke.